Why Do Lawyers Lie? Tackling The “Lie-awyer” Phenomenon.

It is a generally and widely held belief that (almost) all lawyers lie. I am unsure why and where this belief originated from, but it is quite an established one. So much so that on Google, there are about 11 million references to the question or phrase “why do lawyers lie,” when typed into the search bar.

And while 11 million might not be a lot, or maybe it is, remember that this is just from one search term, there will be a multitude of ways people ask the question or a multitude of different phrases that people use to search for that information. 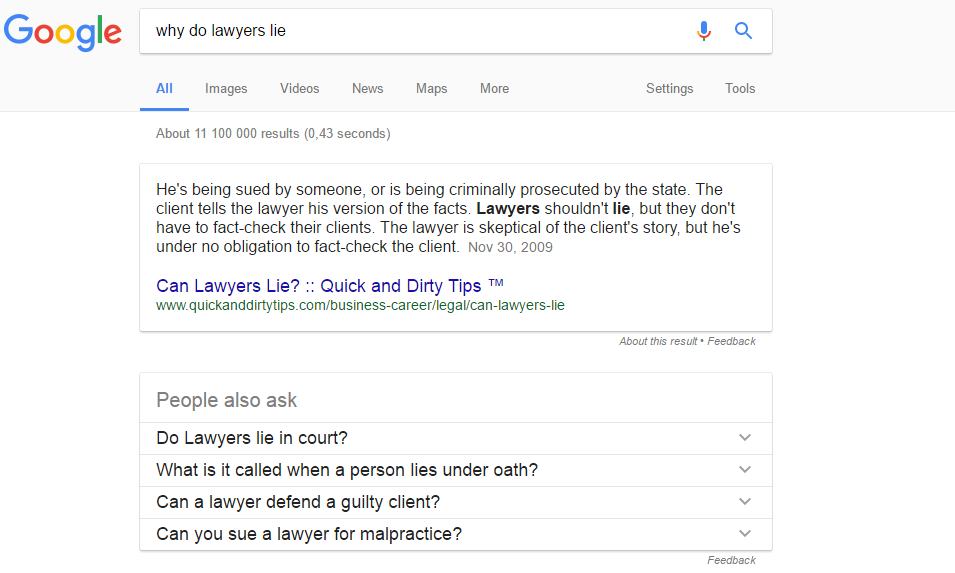 As far as I am concerned, the answer is very simple. “Lie-awyers” lie because they want to win. And if a lie is going to help them win, then so be it.

Can you imagine a situation where a lie-awyer kept on loosing case after case, “simply” because s/he told the truth? More so when a “simple” or even not-so-simple lie could have possibly changed the outcome. What do you think would happen to that lie-awyer when word gets out about their successive string of not-so-positive outcomes for their clients?

You can be sure that anyone who does their research and hears about these string of losses will very likely pass over to the next lawyer or law firm, thereby ensuring that slowly but surely, his or her law firm and practice will die a slow death. So to prevent this, they lie when they think they should.

Granted, my take is that this has not always been the case. If we go back several decades, to the era where black people in America were arrested, prosecuted and wrongfully sent to prison for crimes they did not commit, largely because of a lie told by several people, starting from someone giving a false testimony, to the prosecutor not caring about the truth but insisting on either perpetuating the lie being told, and worse telling his own lie to get that man convicted.

In that era, it is safe to say that lawyers lied primarily because of their hatred of, and prejudice towards black people. This is of course in addition to their wanting to win, but the primary cause of their “lie-awering” back then, was probably the hatred they had of and for black people.

Read next:   The Inevitability Of Car Accidents. And The Importance Of Lawyer

Stories abound online about such cases and a Google search will reveal of them. The sad part of it is that it is still happening in the 21st century

These days, while such people very probably still exist, they are not in the majority, and thankfully, modern science has given us many tools that can sometimes or even most times help disprove many of those lies that lawyers tell to send an innocent person to jail.

That lawyer’s lie is perhaps not in doubt to anyone, perhaps except to lawyers themselves, or at least some of them. What is perhaps in doubt is what to do about it. Can anything even be done about it? Because it makes no difference what aspect of law is being practiced, whether it is a counselor defending a client in a criminal case in Chicago, to a NYC contract lawyer representing a client in a dispute or breach of contract matter.  Or a general small business attorney in NYC representing his client’s best interest, one thing is almost certain, if a lie is likely to positively affect the outcome of the case, then you can be sure that lie will be told.

Do Other Professions Lie?

But to step back and take the “spec” out of my eyes and the eyes of other professions. We should ask the question, do other professions lie as well, and or lie as much as lawyers? Just to name a few; Are Doctors generally known to lie in the performance of their jobs? I think the answer is no. And what about Accountants and Bankers? It is safe to say no.

And while of course there are and have been a few individuals in these two professions who have been caught doing improper things like “cooking the books” and stealing money from peoples’ bank accounts respectively, which in a way can be equated to “lying” in the case of the accountant “cooking his books,’ and much less in the case of the banker, it is still not known to be a widespread practice.

Read next:   Safety of Teenage Drivers: a Peak Priority

What To Do About It?

So, going back to the questions I previously asked, if the “fact” has been established, the question remains, what to do about it? But first, let me proffer another guess, that one other reason they do it, is that there is practically no real (negative) consequence to them, if they are caught doing it.

So my best guess, is that one method that can be used to reduce the incidence of attorneys lying is to make sure that there is a consequence to them if they are discovered to be lying. And by consequence, I don’t mean them losing a client and consequently the pay check the client would have paid.

But rather a real consequence like their license being suspended for certain periods, or even revoked, and Jail time (this certainly would have made those prosecutors from decades ago in the wrongful prosecution cases think twice about their actions.)

Do you have any ideas on what can be done to reduce the incidence of the phenomenon of “lie-awering?” Feel free to drop your thoughts in the comment box.

Things to Consider While Home Renovation

How to Help Motivate Your Dog for Better Training